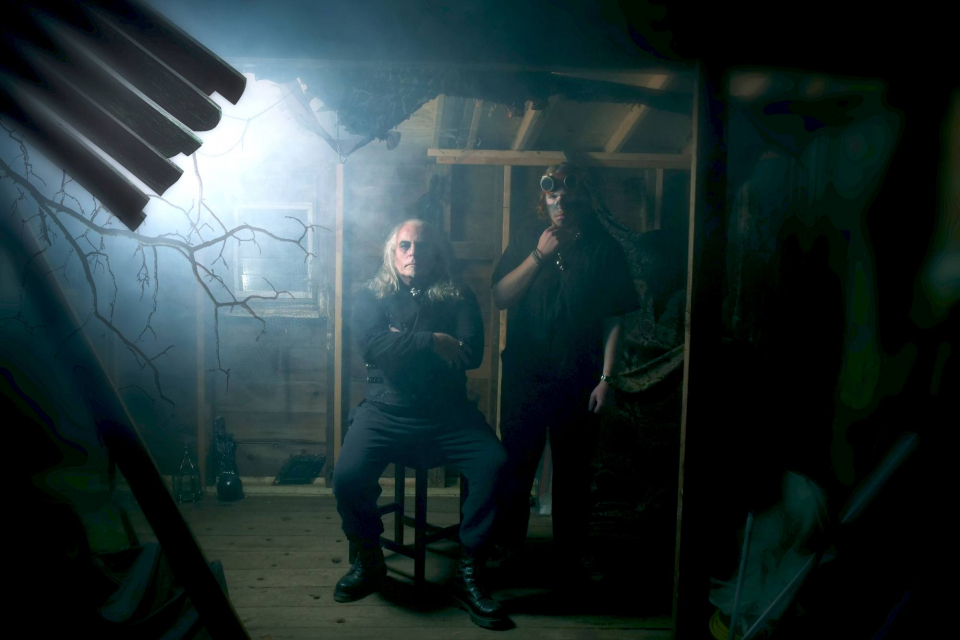 Our first single from the forthcoming LP, "Cyborg Amok - Etaim" has been released ... a cover of David Bowies "Golden Years". It is availble on Bandcamp. A second single accompanied by a video will be released July 17 ... The rest of the LP will be released 10/8. More info to follow.

The time is coming, soon! The release of our new single, "Golden Years", from our forthcoming LP, "Cyborg Amok - Etiam", will be released next week on June 12.

It's been a while since we last posted new/updates. We have been working on our new LP and rehearsing  and developing our live show. There will be a first single release from the new LP, "Cyborg Amok - Etiam" on June 12. A new video and 2nd single release slated to debut on July 17 on the podcast, Space Couch. And, of coarse, live shows are being sorted for this coming summer. All in all, we are busy and getting busier with sharing Cyborg Amok music with the world.

Last week we released our latest video, "Dancing On The Floor Of The Sea of Tranquility", from the Cyborg Amok LP. Our new video will be broadcast on EmtyveeTV next week. We also did more drum and vocal tracks for some of the music on our upcoming LP, due to be released late summer/early fall of 2022. Frani has departed as our guitarist (to focus on family issues), so the search is on once again. Fans can expect a new single (LP pre-release) and video in June/July ... announcments soon regarding the new LP. We have songs, we have the title, we have the cover art, we just have to decide when we want to share the info ... stay tuned.

Cyborg Amok welcomes Michael Nagy (DiscoveringBands.com) to our team. Michael will be working with us on management duties, PR and seeking performance opportunities.Coming soon will be a video for another song from our current LP (Cyborg Amok). For the past month we've been working in Retromedia Studios on our new LP. The first song is nearly done and should be released as an (album pre-release) single, with video, sometime in June. We will be announcing more details in the coming months.

We have regrettably made the choice to postpone our live video shoot slated for January 3rd, 2022. Due to the rampant wave of Covid 19 currently sweeping New Jersey and the East Coast, we felt it would be irresponsible to put dozens of fans in a venue for several hours, and create a speader event. We will let you know as soon as we have a new date ... we are projecting late February, early March. In the mean time we are continuing to rehearse our show. We will be adding more songs, including a Cyborg Amok version of Sleep Tonight (from Gregs' solo release Moontime Shadows) ... which will be released as a pre-release single for the forthcoming Cyborg Amok album, as well as a video. There is much more in the works that we can't talk about yet. 2022 is looking to be an amazing year. Have a safe, Happy New Year!!

Things are moving quickly ... we have confirmed our showcase/live concert video shoot for January 3rd, 2022. We will be playing at EJs Taphouse in Seaside Heights, NJ. Our guitarist Frani Lugo will make his Cyborg Amok debut. Plans for the new LP are going smoothly ... likely to start recording late January, early February. There is talk of a new "concept" video for one of the songs from the upcoming LP to be released in conjunction with the pre-release single. Watch for that. And finally, we have a new agaent working with us, so you should begin to see more movement regarding promotions and upcoming shows. As 2021 ends, we are very excited about the prospects 2022 holds for Cyborg Amok and our fans.

The end of year is near. 2021 has been good for Cyborg Amok ... current LP released in June, played the Evil Expo in July, "Burden Away" video released in October and we've done several interviews lately. Looking forward towards 2022 ... we plan a "debut" showcase/live video shoot the first week of January for a virtual concert which will air internationally in February. We will start working in the studio on a new LP in February with our new guitarist (more on that down the road), and we are planning live performances (festivals, concert venues, etc.) throughout the year. So, stand by everyone, there is a lot to look forward to in 2022.

We remain in the midst of rehearsals for our live show. As of now we are working in a new guitarist ... more details down the road on that. We are keeping the identity under wraps for now. Rest assured, he's a pro and we are excited to have him in our camp. More exciting news to follow, soon ... a live show video shoot, a streaming concert, etc., etc.

Cyborg Amok released our new video for the song Burden Away. We worked with Howl Peak Productions to depict the future of Cyborg Amok. A post-punk, goth, dark alternative project out of the swamps of New Jersey. Nick Wolf and Pete Carter did a masterful job at presenting our song to the eyes of the world.

We have been busy here at Cyborg Amok base camp. Our music has been getting internet radio play in the UK and Germany, as well as here in our home state of New Jersey. We will be releasing our new video for "Burden Away" on Halloween. We are planning a live show video shoot in early November. And, there are several surprises we can't talk about yet ... stay tuned. Major announcements coming.

Official video shoot for "Burden Away" with Howl Peak Productions. Shot some new promo pics as well. Stay tuned for the results ...

Our LP is now out on all digital outlets, including Spotify, Apple Music, Pandora, etc., etc. to make it easier for our fans to listen to our music. Our prefered sales vendor is still and always, BandCamp.

Working with Howl Peak Productions, we will be shooting a new video for our song "Burden Away" on September 4. We are planning a mid-November reveal. Stay tuned ...

The live debut of our recently released self titled LP, Cyborg Amok, at the Evil Expo was fantastic. Thank you to those who joined us in the adventure.

We have produced a hard copy compliation CD, which includes the music from both previous digital release EPs in one place. "Cyborg Amok - Cyborg Amok" will also be added to BandCamp as a digital release. These CDs will be available at shows and on request. Stay tuned, more to come ...

Today we decided to remove all links to Spotify and delete our Spotify presence. We had long ago removed any trace of digital sites such as I-Tunes Music and Pandora. Until these sites provide reasonable compensation to independent artists Cyborg Amok can be found exclusively on BandCamp. A distribution partner that actually has the artists interests at the forefront of their platform.

Currently putting the "live" line-up together for shows in 2021 ...

Out today!! "Cyborg Amok - TOO" has been officially released. Visit our Bandcamp page here.

Another day of drum and vocal tracks at Retromedia Studios. One more song closer to the completion of the new EP. The session for the final song will occur early December. More on that later ...

We did some recording today. Drums and lead vocal for a new Cyborg Amok song. Our new EP is coming along, on schedule. Thanks to Retromedia Studios for a great session.

Things have been progressing a little slow these past weeks. With the pandemic mucking about, shows we had aticipated have not happened and studio time has been carefully managed. We are pleased to let you know that we have scheduled time at Retromedia Studios for more drum tracking in the coming weeks. Cyborg Amok continues to move forward with our second EP, albeit at a pace slower than we'd like. More info coming soon ...

New music has been posted on YouTube ... Burden Away, the new song from our forthcoming EP Cyborg Amok - Too. It is a slight departure from The Order Of DisOrder. JD McGibney is playing guitar on it with Adam Vacerrelli playing bass. Expect an early 2021 release of the full album ... for now, enjoy this preview of what we have in store for our fans.

Today we went into RetroMedia Studios to do the final mix for "Burden Away", our new song  from our upcoming EP release. The files have been sent out for mastering and should be released in the coming weeks ... accompanied by a new video as well.

We are dilegently processing the first song of our upcoming EP. Adam will be laying down bass tracks today and proceed with mixing in the coming days. Then, off to mastering. The reveal is coming ... soon!

Spent the day in the studio recording drum and vocal tracks today. We are very excited about the results. There is some big news on the horizon ... updates about "Cyborg Amok - Too" coming soon. Stand by ...

Rehearsal tonight went smooth. Ran through the current songs, and then spent about an hour on two of the new songs for the EP ... Burden Away and The Choice Not Taken. Recording sessions start next Tuesday with drum tracks and a reference vocal track for Burden Away. Stay safe everyone!!

We had another great rehearsal tonight. Cyborg Amok commends the studio on their disinfecting protocol, we feel completely safe in the rehearsal environment. We are working on four new songs for our next EP ... "Cyborg Amok - Too". Recording time has been scheduled in first week of August for (socially distanced) drum tracking. More exciting news to follow ... stay tuned!!

Cyborg Amok gets back into rehearsals for live performance and to work on new material for their second EP project.  A release date has not been determined, but we are shooting for late 2020/early 2021. The hiatus lasting from March 2020 till now was way too long ... and the future is uncertain. We are working as safely as possible to build a  great show for our fans, and put together another compelling EP project.

We spent the night on a photo shoot with Howl Peak Productions in Asbury Park. We chose to shoot after dark in the shadows of a remote corner of town. We will share the results in the near future.

Cyborg Amok - The Order Of DisOrder is officially released ... available worldwide on ITunes, Amazon, BandCamp and everywhere else you go for your music. Well, we think everywhere else. There may be a few places it is not, but it's out there.